Since 2009, A/Prof Kangaharan has held the position as Medical Co-Director Division of Medicine at Royal Darwin Hospital. He has further contributed to the successful setup of the Chronic Disease Coordination Unit, providing care coordination, education and support to remote Indigenous patients in the Top End.

He was the Chair of the Indigenous Council of the Cardiac Society of Australia and New Zealand (2014-2019) and in 2005 became a Fellow of the Royal Australian College of Physicians.

A/Prof Kangaharan completed his Medical Degree at University of Adelaide with the full merit scholarship of Australian Government. He undertook his post-graduate training at Westmead Hospital in Sydney and Cardiology advanced training at Flinders Medical Centre and RDH.

He is the clinical sponsor for the Territory Wide Integrated Clinical Information project and a key stakeholder in the Territory Kidney Care project governance and implementation. 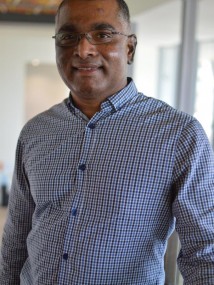