Vicki Wade is a senior Noongar woman with over 40 years of experience in health at state and national levels. Vicki is a recipient of multiple national awards including the 2019 AHHA Sidney Sax medal and CSANZ Indigenous Health lifetime award for her contributions to Australian health services policy, delivery and research, particularly in relation to Indigenous heart health. Vicki is well known across Australia and is well respected for the work she has done in helping to close the gap. She sits on the National Close the Gap steering committee and a previous board member of the Congress of Aboriginal Nurses and Midwives.

Vicki sits on numerous national research projects providing a critical lens to the socio-cultural context with the aim to reduce research and evidence practice gaps. Vicki is a strong advocate for her people following her matriarchal lineage, Vicki’s grandmother was a healer and helped with the Noongar women in birthing on country in the mission and later reserves in south west of Perth, her mother was one of the first enrolled nurses in Perth and her daughter is carrying on the tradition as a doctor. Vicki hopes that the work she does will see her grandchildren have better opportunities that she and her family were afforded. 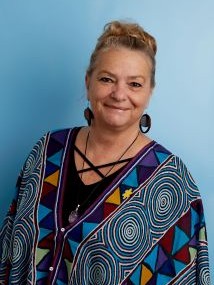