Leanne is an Arrernte woman born and raised in Alice Springs. Leanne has academic qualifications in Environmental Science, Law and Management, but she believes her most important knowledge has come from her grandmother and great-grandmother who taught her about traditional land management skills, particularly with the use of fire.

Leanne has served other senior public service roles, including as the manager of Food Security for Aboriginal communities in South Australia, and the manager of the APY and West Coast regions of South Australia both within the Department for Premier and Cabinet. She was also the first Aboriginal policewoman in South Australia where she worked for 11 years as a Senior Constable in remote and Adelaide police stations. Leanne has also worked on the international circuit; for the United Nations with stints in Geneva, New York and Paris with UNESCO, and as a director for Bush Heritage Australia. She has published scientific papers on the critical importance of integrating Aboriginal science into landscapes.

Since returning to Darwin, Leanne has worked as the Senior Policy Advisor for the Northern Land Council and the Principal Legal Policy Officer in the Department of the Attorney General and Justice, where currently is now, as the Director of the Justice Unit Director where her small team is responsible for delivering the NT Aboriginal Justice Agreement. 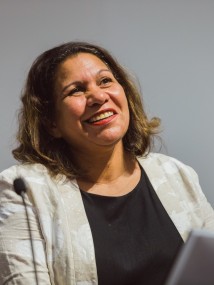