Harry Giese AM MBE (1913–2000) was a Territory community leader and administrator who played a key role in the establishment of the Menzies School of Health Research (Menzies) from the late 1970s to the 1990s.

In recognition of his outstanding contribution to the landscape of health and education in Northern Australia, the Giese family, with Menzies, have developed the Harry Christian Giese – Research into Action Award.

Australia’s first Indigenous kidney specialist and clinical nephrologist, Menzies’ Dr Jaqui Hughes has been named as the 2016 recipient of the Harry Christian Giese – Research into Action Award to champion the translation of her research findings into medical interventions.

Dr Hughes has been involved in a number of successful renal projects at Menzies, with her most recent collaborative work impressing the panel of judges, including Menzies Director Professor Alan Cass.

“Jaqui has contributed significantly to an important body of research that aims to discover an effective treatment for people on dialysis who have contracted melioidosis,” Prof Cass said.

Meliodosis is found in the soil sub-layer in the dry season, and mobilises to the surface following monsoonal rains during the wet. For people living in the tropics, Burkholderia pseudomallei, which causes the disease, can be deadly--especially for those who live with chronic medical conditions such as kidney failure.

The research team has delivered an antibiotic over the last two wet seasons and identified an oral antibiotic dosing regimen that has proved both effective, with no cases of melioidosis, and safe, with no severe side effects.

Dr Hughes says this treatment is simple and practical.

“The antibiotic was given three times a week at dialysis and had high patient acceptability, as the pill-burden in clients was minimised by dosing after their regularly scheduled dialysis treatment,” she says.

The successful study, which has reduced the number of dialysis patients in the Northern Territory who contract deadly melioidosis, will be adopted by renal units in Australia and internationally.

The Award will enable Dr Hughes to develop a short video to educate patients in the lead up to, and conclusion of the wet season, of the risks associated with melioidosis. Haemodyalysis patients will be consulted to identify key health messages. A dialysis unit barbecue to launch the video will engage patients and care staff.

Dr Hughes said she was honoured to receive an award which recognises Mr Giese, a dedicated leader and innovator in Northern Territory health.

“Thank you to the Giese family for their ongoing support of this important award. I am proud to be this year’s recipient, and also thank the selection panel for recognising this critical body of work.”

Previous recipients of the Research into Action Award have gone on to great achievements including two PhDs, two national awards and findings that have been incorporated into Malaysian health policy.

Dr Gabrielle McCallum, 2013 winner of the Award, has since gained her PhD and, from five finalists selected Australia-wide, won the 2015 BUPA Emerging Health Researcher of the Year. She notes that her work in translating acute respiratory infection treatment into long-term results for children in communities “takes time and perseverance. A multidisciplinary approach, working together, is the key.”

Dr Matt Grigg, 2014 winner for his work with local teams in Sabah, Malaysia on the treatment of malaria, has published a paper in the prestigious journal The Lancet Infectious Diseases. Feedback from international, national and state conferences and from district hospitals and public health teams testifies to the significance of his work. “Now Malaysian national policy for the treatment of Plasmodium knowlesi has changed to artemisinin combination therapy instead of chloroquine, due to the advocacy of our principal Malaysian investigator, Dr Timothy William,” says Dr Grigg

2015 winner, Associate Professor Gail Garvey, was recently awarded the 2016 BUPA Heatlh Foundation Emerging Health Researcher of the Year for her crucial input into cancer care for Indigenous patients. Gail notes that “widespread and routine use of our needs assessment tool has the potential to improve outcomes for Indigenous people with cancer.” 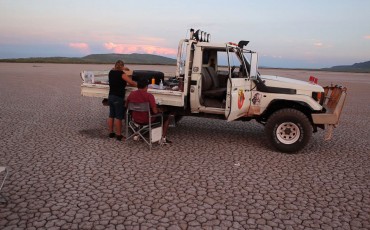