The phrase “Mura Moegi Kazil Sagulau” means “All Children Play” in the Kala Lagaw Ya language of the Near Western Islands of Mabuiag, Badu and Moa of the Torres Strait Islands.

It is the title of a parenting program in the Torres Strait which helped parents develop the skills needed to care for their children. These programs are important to ensure that families are able to provide the best early care for young children.

A child’s early environment and experiences have an enormous influence on the way that they develop into adulthood. Evidence shows that effective early support for parents can significantly improve outcomes for children and families. Considerable effort went into consulting with local Indigenous people to ensure that the ‘All Children Play’ program was culturally appropriate and accessible for local communities.

In 2013, Menzies partnered with Mura Kosker Sorority, a community organisation which provides services to families and children in the Torres Strait. Together, we designed and delivered a pilot program to train community-based workers in child development and early intervention. The project aimed to strengthen the Mura Kosker Sorority’s Child and family support programs in four Island communities; support Island families by offering play sessions and parenting programs; ensure families had access to other health and family support services and to develop resource materials for parenting and family support activities.

The project enabled Menzies to run training for community-based staff working with children and families. Initially, a series of workshops were provided for parents with children under nine. After consultation with stakeholders, an intensive four-week intervention was delivered to identified families.

The training enabled staff to work with parents to support the early learning and development of children under nine. Considerable emphasis was placed on recruiting local people and developing their skills, and on working with the existing local organisations. The program was piloted in two island communities and in 2014 was extended to two additional communities. It ran for two hours each week for a period of six weeks. The project was reviewed and evaluated in collaboration with local people to ensure that it was effective in delivering support to parents in Torres Strait Island communities. 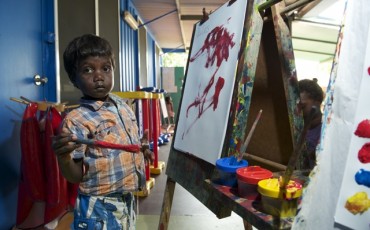