Overarching questions that have guided the evaluation process:

Drinkers Register in September 2017. The report provides an extremely detailed look at the impacts

thus far and suggests some positive effects on individuals on the BDR, especially those with a history

of significant interaction with the justice system. In contrast, the current data does not support major

impacts on population levels of alcohol-related harms, with no clear decline on most indicators.

The report is incredibly detailed, providing an essential benchmark for the ongoing evaluation of the

BDR. It particularly highlights the potentially gradual positive impacts of the register on people’s

lives. More research into the intersection between the BDR and the health system is critical as is more

impact of the BDR on getting people into treatment also needs to be further explored.

evaluation will provide a richer look at the ongoing impacts of the BDR.

The imposition of personalised controls on problematic drinkers has a long history, but is a

Banned Drinker Register (BDR) program is the latest iteration, but it comes with a degree of novelty

and commitment that deserves serious consideration by critics.

Evaluation of measures such as the BDR is both invaluable and necessary if the program is to endure.

If in fact the evidence shows it should.

This 12 month report is impressive in the way a considerable body of data has been assembled,

analysed and assessed in a comparatively short period of time. Political imperatives aside, the

evaluation report shows clearly that the BDR has quickly moved to scale with more than 3,600 people

about the program’s performance and the early results are promising. Recidivists comprise a minority

of registrations and the majority only record one contact with the system.

behaviour, including the offending behaviour of problematic drinkers. This data and the results of the

reduce the prevalence of this behaviour, improving the lives of heavy drinkers and enhancing

administrators to reduce the supply of alcohol to a highly problematic group of drinkers.

Alcohol kills more people globally than AIDS, violence and road accidents combined, and is the

leading cause of death in people aged 15-40. The NT has the highest per capita consumption in

Australia and alcohol-attributable deaths occur in the NT at about 3.5 times the rate they do in

Australia generally. In this context, strong measures are clearly justified and the NT Government’s

For this reason, and to ensure the best mix of policy intervention and value for money of tax-payer

dollars, the ongoing and rigorous evaluation of the BDR is essential. This report provides further

This report highlights some promising changes. In particular, most banned drinkers who had

justice system for similar types of non-criminal events (40% moved to Group C), or had no further

alcohol-related contacts (40% moved to Group D). Further, 30% of those with mixed criminal and

non-criminal events, had no alcohol-related events in the justice system during the follow-up period.

since the BDR was implemented, primarily being driven by people on the BDR.

The largest group of people on the BDR had no alcohol-related events.

helping, and the need for more intensive, and different types of support.

It is also clear that the impact of the ban is gradual, rather than immediate – which is an important

December 2017 and July 2018. Differences between Darwin and other cities suggest there might be

occur in Darwin). These differences are worth exploring in more depth in future evaluations.

This report has shown the value of systematic, transparent and regular evaluative reporting. With

the increased investment in data-linkage capacity, especially in treatment and law enforcement data,

the continued evaluation of the BDR will be an important precedent for future evaluations. 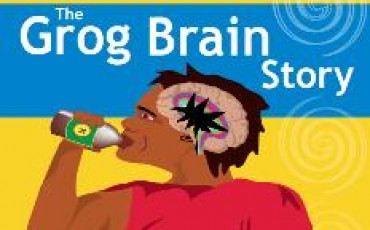 View our resource portal to assist with educating communities about smoking, alcohol and other addictive behaviours.