Youn-Kyoung Goo is studying Plasmodium vivax, a strain of malaria whose ability to lie dormant in the river for long periods of time makes it less vulnerable to eradication.

Understanding the genetic structure will help Youn-Kyoung Goo and the Government of South Korea to address vivax malaria, the devastating parasitic disease affecting millions of people across Asia.

“The genotyping results from this visit will be useful to us to figure out genetic structure of [the malaria species] P. vivax in South Korea,” says researcher Youn-Kyoung Goo.

“It will be the first step to compare genetic characteristics between South Korea and other countries.” This learning, she says, increases understanding of parasite movements across borders and remaining areas of malaria transmission.

“I came to Menzies because, with its high expertise in molecular biology, it is leading collaboration for worldwide genotyping study of vivax malara.”

Menzies has been able to assist people like Youn-Kyoung Goo through training, grants, and capacity building workshops funded by APMEN.

These projects are part of a regional collaboration to improve the treatment of vivax malaria in 14 countries across the Asia Pacific region including Indonesia, Cambodia, Bhutan, China, Malaysia, Sri Lanka and the Republic of Korea. 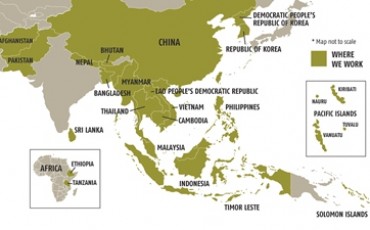