Sir Edward Hughes was calling from Melbourne with an offer.

Hughes was the head of surgery at Monash University and the new chairman of the Sir Robert Menzies National Foundation for Health.

Established in 1978, a year after the death of Australia’s longest serving prime minister, Bob Menzies, the foundation was busily setting up state and territory committees.

It sought a representative in Darwin.

On the line to Melbourne, Hughes thought for a moment, then suggested for the job passionate Territorian Harry Giese – whose wife Nan would later become chancellor at Charles Darwin University.

A former educator, Ombudsman and Director of Welfare in the Northern Territory Administration, Giese shared a strong interest in the foundation’s goals and its push to promote excellence in health research.

Giese accepted the position, becoming the chairman of the Northern Territory Committee of the Menzies Foundation.

An atmosphere of change:

At that time in the 1970s federal funding for Aboriginal health projects and research remained scarce.

The Department of Aboriginal Affairs awarded small grants to a few specific projects, but that was the limit of its reach.

'The Menzies School of Health Research came about as a result of the dreams and drive of a generation of Darwin residents, of the aspirations of a newly created Northern Territory Government determined to have a university and the foresight of the Sir Robert Menzies Memorial Trust.'

Giese and his committee set about garnering support for a research school housed in Darwin.

The committee ran two conferences titled, ‘Living in the North’, the second of which took place in 1982. It invited researchers and research school managers from around the country.

The conference concluded with a clear set of recommendations: namely, it endorsed the creation of a new medical research school under the wing of a university.

The project was set to go, but it needed funds and the support of a university.

Its first request for funding naturally fell to the Sir Robert Menzies National Foundation for Health in Melbourne.

In part because of its strong interest in the new school bearing the name ‘Menzies’, the foundation agreed.

The Foundation initially committed $75 000 for the first three years of the school’s operation, and later added $25 000 for the purposes of securing a high calibre director.

It then set about securing a partner university. The University of Sydney was approached. It agreed, offering academic as opposed to financial support.

Finally, the nascent Northern Territory Government, headed by Chief Minister Paul Everingham, stepped forwarded – though not before a tussle with the federal government over who should fund the project.

No Commonwealth funds were available, so eventually Everingham agreed to an annual operating grant of $900 000.

On 17 January 1983 Giese and the foundation’s vision rose to life. That day, Planning Vice-Chancellor of the Northern Territory University, Dr Jim Eedle, officially announced the establishment of the Menzies School of Health Research.

Eighteen months later on 24 June 1984, Menzies opened its doors for the first time.

“The Menzies School has contributed to the debate on Aboriginal Health by helping fill gaps in understanding, communication and implementation. It has attracted expert staff to the Northern Territory, driven research to identify areas of unmet need, tested innovative health interventions, and been an evaluator, critic and advocate of Aboriginal health policy.”

"We learn to co-operate by doing things together…I am confident that, given good professorial leadership, adequate resources, good staff and scientific facilities, there can be created in this School a Centre of Excellence devoted to fundamental research and the deeper understanding of and the cracking of the health problems of the people of the Territory and tropical Australia."

"The role of the School is to assist in improving the health of all people in tropical and central Australia, to conduct research and to provide education in the fields of occupational, environmental, Aboriginal and community health and health education."

"There exist special hazards both to human and animal health, to all those who live and work in tropical and Central Australia…and to those living in similar climates around the world…This includes the populations of many Third World countries, many of which lack the resources to undertake comparable research of their own…including some of Australia’s near neighbours in the Indo-Pacific area. Discoveries resulting from the work of this School will also advance general medical knowledge and thus aid in the improvement in health of all the peoples of the world." 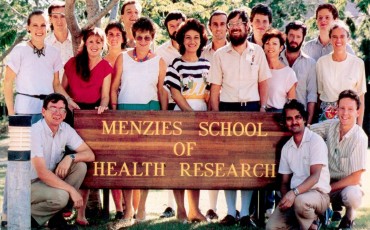