Harry Christian Giese AM MBE (1913-2000) was a community leader and administrator who played a key role in the establishment of the Menzies School of Health Research as the first faculty of the Northern Territory University. He and colleagues brought together as stakeholders the Northern Territory government, the University of Sydney and the Menzies Foundation, to set up the School.

During the late 1970s to the 1990s, Giese served on the Board and National Executive of the Menzies Foundation. This Award recognises his outstanding contribution to the development of health and education in northern Australia.

The 2019 Winner is Dr Nicholas Fancourt, a paediatrician with degrees in medicine and bioethics, whose PhD in Health Systems was achieved while an International Fulbright Science and Technology Fellow at Johns Hopkins University.

In Timor-Leste, 722 kilometres from Darwin, child malnutrition is among the highest in the world. Dr Fancourt leads a team that aims to improve outcomes for children hospitalised not only for malnutrition, but also for pneumonia. The research project Pulmao Saudavel (Healthy Lung) is identifying different features of pneumonia between children who are malnourished and those who aren’t. Information gathered  on clinical findings, demographics, feeding practices, risk factors and food security will underpin a vaccination program.

The 2019 Harry Christian Giese Research into Action Award will support a Nutrition Worker to lead an education program for 8 months, to better understand the social and cultural drivers of malnutrition, the experience of hospital care and perceived barriers to recovery. It will fund the design, manufacture and printing of resources such as interactive games, flip charts and toys focused on healthy infant feeding practices, in collaboration with other stakeholders such as UNICEF and World Vision. It will support the cascade of care for malnutrition, from hospital to community-based treatment including follow-up home visits with patients; improved referral documentation; and the encouragement of local leadership.

Menzies already has strong relationships in Timor-Leste, including a Memorandum of Understanding with the Ministry of Health. Joint work is continuing at Hospital Nacional Guido Valadares (HNGV), the national referral hospital in Dili, as well as community health facilities and the National Health Laboratory. Supporting child malnutrition as a priority will highlight an important area in the national nutrition strategy, to be updated in 2020.

Past winners of the award are continuing with their work at Menzies.

Dr Ley-Thriemer used her Award to provide easy-to-understand summaries of effective vivax malaria treatment in local languages such as Pashtu, Amharic and Bahasa Indonesia at sites including Ethiopia and Indonesia.

Community meetings are being held, and in October 2019, a workshop during the annual meeting of the Vivax Working Group of the Asia Pacific Malaria Elimination Network. This set out to develop country-specific road-maps for change in policy and practice for safer and more effective cures in 19 vivax-endemic countries, including Vietnam and Afghanistan. Cost-effectiveness models and timelines for change were developed.

More than 2.5 billion people around the world are at risk of acquiring vivax malaria, which can stay dormant in the liver, then appear months after infection. Treating it with primaquine is known as the radical cure. But 14 days of unsupervised treatment works poorly, leading to many relapses and accounting for 80 per cent of acute vivax malaria.

‘We recently completed a multi-centre trial, IMPROV, at sites in Vietnam, Indonesia, Afghanistan and Ethiopia, with 2388 patients’ said Dr Ley-Thriemer.

Results suggest that doubling the daily dose of primaquine to provide treatment over just 7 days is both effective and safe. There is growing evidence to show it could also work for Plasmodium falciparum patients, so accelerating overall malaria elimination.

Dr Kirkham says that the Award, ‘a fantastic initiative’, enabled her to produce short videos sharing experiences of diabetes in pregnancy. These have been used widely by clinics.

View the Diabetes in Pregnancy videos here on the resources tab. Since winning the Award, she has established Menzies’ Youth Working Group and in September 2019 led the NT Youth Health Summit. She is Co-Investigator on the Youth Type 2 Diabetes Northern Australia Collaboration, for two years from 2020, and in 2018 won a Hot North Fellowship.

Associate Professor Hughes has secured a highly-competitive 5-year NHMRC Fellowship giving her time to further her work in advancing kidney health. She was appointed Deputy Chairperson of the National Indigenous Kidney Transplantation Taskforce and recognised by her peers as the 2019 Australian Indigenous Doctors’ Association Indigenous Doctor of the Year. Catching Some Air, a project focused on Aboriginal and Torres Strait Islander information rights in renal disease, was completed in 2019.

The SCNAT-IP (Supportive Care Needs Assessment Tool for Indigenous People) has been incorporated into the wider Australian cancer care framework, driving policy and practice. It helps Indigenous patients and their families through a Website hosting an online training module, completion of which is a prerequisite for accessing the tool.

There have been training workshops in NSW, Queensland, SA and the NT, in urban, remote and rural settings, and meetings including that of the Cancer Nurses of Australia. The tool is being used in Canberra Hospital, the Alan Walker Cancer Centre and IUIH, an Indigenous, community-controlled health service. Menzies’ strong relationship with Cancer Australia will drive further adoption.

The beginning of 2020 saw the start of the NHMRC-funded TACTICS program to improve cancer services and outcomes for Aboriginal and Torres Strait Islander Australians. It aims to increase prevention and early detection; to improve diagnosis and treatment in culturally-appropriate ways; and to provide care for survivors, their partners and carers to enhance psychosocial wellbeing.

Dr Grigg was awarded a large ACIAR-DFAT grant to expand work on zoonotic malaria into Indonesia: North Sumatra, North Kalimantan and Sabang, Aceh. This will include molecular surveillance in humans using sensitive diagnostics; identifying specific species of mosquito that transmit these types of malaria and observing their behaviour; geospatial risk mapping using human, mosquito and monkey data to estimate transmission risk; and evaluation of agricultural land that may be increasing transmission.

His teams are also continuing their work in Sabah, looking at state-wide malaria trends, using hospital cases to further investigate underlying mechanisms of malaria  severity and, in an army cohort, longitudinal risk of exposure and infection.

Dr McCallum was awarded NHMRC funding for a randomised controlled trial to determine whether months of weekly azithromycin (compared with a placebo) improve clinical outcomes for Indigenous children under 2 years hospitalised with acute lower respiratory infection. The trial is being run in Darwin and 2 sites in New Zealand.

She is also an investigator on several other NHMRC/MRFF trials to improve clinical outcomes for lung health in children.

She is a member of 2 working groups, the first as part of the Thoracic Society of Australia and New Zealand, to develop a position statement for electronic cigarettes, and the second as part of the European Respiratory Society taskforce to develop clinical guidelines for children with bronchiectasis.

‘I continue to lead the respiratory program in Darwin with a team of phenomenal people’, she says. ‘We are all focused on improving lung health outcomes for children.’ 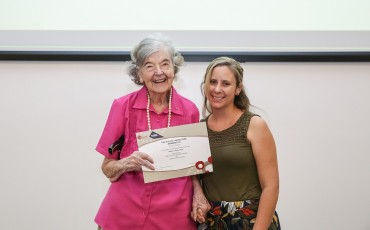